Episode Fifteen – ‘Dancing at the Midnight Hotel’, Part One

Posted on September 29, 2016 by imaginarytravelling

That at least was my first impression when we arrived at the latest location indicated by the inter-dimensional travel drive. A lonely, narrow road had led us onto a broad sweep of coastline by a dazzling blue sea. Most promisingly of all, in terms of hunting down the hidden room of Sturridge’s prison, it seemed that only one structure lay within the co-ordinates registered by the gadget – a grand hotel perched on a clifftop, overlooking a shallow bay. The crisp bright building appeared on first impressions to be neither shabby nor luxurious but rather the kind of clean, comfortable place that would find favour with a wide assortment of travellers.

There was little sign of life as we walked up the sweeping driveway but I figured the strength of the late afternoon sun was probably still enough to drive most people in search of shade. Several rings on the reception bell in the broad, empty lobby failed to elicit any form of service so we explored a little further. A door to the right brought us into a long, low cocktail lounge. Here we found a solitary waiter in a pair of baggy shorts and a waistcoat perched atop a barstool, idly doodling on a napkin whilst he waited for some indication of service required from amongst a spread of gently dozing guests.

“Sure, we’ve got free rooms,” he told us in response to our tentative enquiry. “I’ll take you to see Maia, she’ll sort you out.”

He jumped down from his stool and led us back out into the lobby, where he banged loudly on a door behind the reception desk marked ‘Private’. Without waiting for a response he flung the door open and called out, “New guests for you”. Then, having ushered us towards the open doorway, he hurried back to his post with a cheerful wave.

Michael and I peered cautiously forth. The door opened onto a mid-sized office whose walls were lined with an assortment of illustrated sea views. A tall, rather sturdy looking Polynesian woman was reclining in a large armchair alongside a polished desk, an open magazine rising rhythmically up and down on her chest. She drew herself slowly and fitfully back to the land of the living, opening first one eye and then the other and fixing them upon us. She studied us quite thoroughly for a moment or two before suddenly casting the magazine aside and leaping up from the chair with an unexpected burst of energy.

“Welcome! Welcome to the Midnight Hotel,” she cried. “Do come in. I’m Maia, I run this place. So you’re looking for a room, are you?”

“One room or two?” she asked with another searching glance.

“It should only be for a night or two,” I added.

“Oh, stay as long as you like,” insisted Maia with an airy wave of her hand. She moved over to the desk and switched on a rather antiquated looking computer, giving the monitor a couple of hearty thumps of encouragement as she did so.

“About your rates…” Michael began, bracing himself for a bout of haggling.

“Don’t you worry about that, I’m sure we can come to some arrangement,” asserted Maia. “But if I could just get you to fill out a few details,” she added, pushing a couple of registration forms across the desk.

As we picked up the proffered pens and scribbled down our info I could sense Maia’s busy eyes peering at us from behind her computer screen.

“Have you travelled far to get here?” she asked casually.

“Farther than most, I’d say,” Maia remarked lightly. “You’re not actually from the landscape, are you?”

“Well, no,” I confessed. There was a pause and Maia continued to regard us with interest. “It’s kind of complicated…” I began somewhat awkwardly, sensing that perhaps some sort of explanation was required but not quite knowing where to start.

But Maia swiftly waved away my attempted speech. “No need to account for yourselves here,” she told us. “We’re quite used to dealing with refugees from reality. In fact, you’d be surprised at the kind of folk who turn up here. But I like to think a good hotel should be equipped to deal with any guest that might roll through their doors.”

I smiled politely in return. Despite her outwardly friendly nature there was something just a trifle unsettling about Maia. Her vibrant energy and smooth, unlined face suggested a youngish woman but there was something about her face and manner that made me suspect she was a bit older than she first appeared.

Further speculation was interrupted by a languid voice calling out, “Knock knock,” from somewhere just behind me. I turned to discover a tall, thin young man with a hipster beard draped against the doorframe. Draped against him was an even taller and thinner young woman with long blond hair.

“Nils sweetheart!” cried out Maia enthusiastically. “And Jenni darling! I was starting to worry you weren’t going to make it.”

“Hey, chill Maia,” replied Nils smoothly. “Have we ever let you down?” Maia replied with a look that suggested her take on the issue might differ somewhat from Nils. Nils shrugged. “We okay to take our stuff straight down onto the beach?” he asked. “I wanna get those speakers set just right.”

“You’d better go round by the garden. I can’t have you waking up my guests in the lounge,” warned Maia. Nils responded with an especially relaxed gesture of acquiescence. Maia’s stern look swiftly faded away and she gave the pair an eager smile. “I hope you’ve got a few new treats in that record box of yours, just like you promised.” 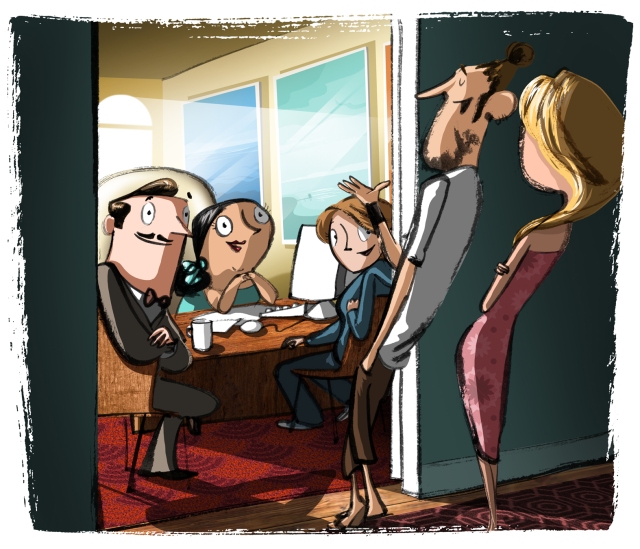 “Alright then,” said Maia. “I’ll be down myself before long to see how you’re getting on.”

Nils tipped his hand casually to his forehead in a kind of lazy salute and languidly peeled himself off the doorframe before he and Jenni sauntered away across the lobby.

“That was Nils and Jenni,” explained Maia rather redundantly once they had gone. “They’re doing the music for a beach party we’re putting on down in the cove tonight. We like to throw a little party down there every now and again. I’m a firm believer that a bit of a blowout once in a while is good for the soul.”

“You should come along,” Maia added with enthusiasm. “All are welcome.” She paused and regarded us with another of those mildly unsettling gazes. “You both look like you could use a little fun. Been on the move a bit too long, I’d say.”

The note of accusation in her tone rather caught me by surprise and so, not knowing quite how to respond, I merely smiled.

“I thought as much,” said Maia, apparently taking my silence as an admission of guilt. “This landscape can be a harsh place sometimes, particularly if you don’t have any roots here. But you come down to the beach tonight and we’ll see if we can’t brighten you up a little.”

Maia seemed about to press us further on the issue but after a pregnant pause she instead turned away with a casual smile. “Of course, it’s entirely up to you,” she said breezily, reaching out to pluck two keys from a rack on the wall behind her. “After all, everyone has their own way of relaxing. And we like to think we can accommodate everyone here, no matter what their inclinations.”

Turning back, she scooped up our completed registration cards and, pressing the keys into our hands in their place, concluded with a particularly cheery smile. “Either way, you can be sure we’ll do everything we can to make sure you enjoy your stay at the Midnight Hotel.”

We were shown up to our accommodation by a muscular porter named Samson who seemed rather put out that we had no real luggage for him to carry. Maia had picked out for us two adjacent rooms on the second floor boasting stunning views out over the ocean. It didn’t take long for me to take a quick tour of the en suite facilities, read through the room service menu and test out the mattress before I was ready to meet up again with Michael to plan our campaign of action. We headed back downstairs and discovered that the cocktail lounge led out onto a large open terrace. Taking a couple of seats beneath the welcoming shade of a striped umbrella we considered our options.

“Even with a hotel this size I can’t imagine it’ll be too difficult to track down the hidden door,” I remarked complacently. “Easier than trawling through block after block of high rise apartment buildings at least.”

“Ideally we need to try and get hold of a plan of the building,” suggested Michael. “Or maybe we could get a member of staff to show us around.”

“We just need to be methodical,” I insisted. “Take it floor by floor, start at one end and sweep through. It’ll be a doddle.”

Michael nodded. “If we make a start now we could probably be finished and on our way again by tomorrow afternoon.”

There was a long pause during which neither of us made a move.

“Isn’t it a little close to dinner-time to start now?” I finally said, my enthusiasm fading just a touch.

“All the staff will probably be busy for a start,” I added.

“Alright then,” Michael conceded. “We’ll get started after dinner.”

Just then we were distracted by the sound of voices from somewhere just beyond the edge of the terrace. We looked over to see a group of young people, Nils and Jenni amongst them, struggling to carry a vast sound system and two enormous speakers between them. Despite the effort involved there was a good deal of laughter and good-natured banter as the party weaved its unsteady way across the uneven ground. Finally they dropped out of view down a flight of steeply cut stone steps that presumably led down to the beach.

“I suppose that must be for the party,” Michael said, gazing wistfully after them. “They’ll be starting soon after dinner by the looks of things.”

“Maia did seem quite keen that we should go,” I remarked as I joined Michael in peering longingly over the edge of the terrace, where the sea could just be seen lapping against the golden sands of the secluded beach. It certainly looked like the perfect place to hold a party. “Maybe we ought to pop along and show our faces,” I suggested tentatively. “You know, just for a bit.”

Michael hesitated for the briefest of moments. “I don’t see why not,” he soon agreed. “After all, it’ll be a good place to meet a few people. And it can’t hurt to take a bit of time and get our bearings before we start searching properly.”

“Absolutely,” I agreed heartily. “In fact, it’d be rude not to.”

Michael relaxed back into his chair for a moment with that contented air he often wore when something had finally been settled to his satisfaction. His eyes drifted lazily over the water for a moment or two but then he suddenly sat up again and fixed me with a stern glance. “Of course this means we’ll have to start our search first thing in the morning,” he warned me. “No excuses.”

“Of course,” I breezily assented. “First thing in the morning. No bother.”

This entry was posted in Episode 15 and tagged Fiction, Illustration, Imaginary Travelling, writing. Bookmark the permalink.